During a recent Bulldog Reporter webinar I moderated on the subject of media relations 2.0, a senior communications professional from the Public Broadcasting System (PBS) noted that when the organization wanted to announce news, it simply posted the story to its Facebook, LinkedIn and Pinterest pages, Twitter and Instagram feeds, and probably one or two others. This approach is in stark contrast to an organization’s long-held reliance on journalists to interpret then share the story with their media outlet’s respective readers, viewers and visitors.

By posting its news on the networkâ€™s social channels, with their millions of followers (that include nearly every social-minded TV reporter), PBS also eliminated the need to purchase a paid wire service distribution. Then again, PBS is not a publicly traded company, so the SEC’sÂ ever-loosening rulesÂ governing of Reg-FD do not apply.

The value to a company of its “owned” media channels cannot be overstated. I’ve written on more than one occasion how Google, and Twitter for example, need only post their company or product news — however inconsequential — on their corporate blogs to set tongues-a-waggin’ among their end-users and the many journalists who obsess over them.

For big social media-minded consumer-facing brands — from technology to automotive to CPG — having large social followings is a blessing from a communications and control perspective. No longer are they suppliant to the fifth estate to disseminate their news. What’s more, they can engage directly with their constituents using language and visuals of their own choosing.

Yet, as we learned this week, a large social media following is also a double-edged sword.The unintentional tweet of a pornographic image to U.S. Airways’ 400,000+ Twitter followers set off a firestorm, as it languished on the company’s Twitterstream for an hour for all to share before its removal.Â Â It seemed like every PR/media pundit and channel I know weighed in on the brand-tainting breech.

And who can forget the ill-conceived tweet from IAC’s head of communications just as she went off-the-grid for a long overseas flight? In the early days of real-time social media, one could try to hide behind the claim that “I was hacked.” In some cases, it actually was true, like the time the AP Twitter feed reported “two explosions in the White House.” 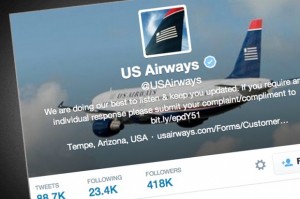 Both beg the question of how best to both wield and harness this newly acquired power to influence hundreds of thousands if not millions of people (most of whom already have some positive affinity with the company or brand). I’m not talking about social media guidelines for social media managers and socially active employees, but rather something more akin to a network news division’s standards & practices, or a respected news organization’s standards & ethics.

Should businesses have an ethical or fiduciary obligation to fully vet the information they trumpet to their followers in the same vein as high quality journalistic enterprises? Â Or is there an assumption that recipients of such “news” already consider the source when weighing the veracity of the message? Also what steps can companies take in advance to minimize the fallout when an offensive tweet or Facebook post emanates from the company’s main feed? There are options. My client Crisp Thinking‘s Adam Hildreth offers some ideas here.

I’ll end by quoting someone who lives and breathes such issues. Â Pete Blackshaw is NestlÃ©â€™s global head of digital and social media. He recently said: