The debate over the value of the press release has raged pretty much unabated for the last seven or eight years. My pal Todd Defren literally built his PR firm on the back of his pathbreaking effort to re-imagine the press release of the future. (Yesterday, his company Shift Communications was named PR Agency of the Year by my other pal Paul Holmes of The Holmes Report.)

More recently, however, the SEC has loosened its regulations to allow publicly-traded companies to announce material news via their social channels. Gee, it wasn’t that long ago when Sun Microsystems’ then CEO Jonathan Schwartz lobbied the SEC to allow his company to break company news on his blog. The SEC’s Full-Disclosure rules have long required publicly traded companies to treat all investor audiences on a level playing field.

In its release announcing the acceptance of social media as a bona fide media distribution channel, the SEC wrote:

“The Securities and Exchange Commission today issued a report that makes clear that companies can use social media outlets like Facebook and Twitter to announce key information in compliance with Regulation Fair Disclosure (Regulation FD) so long as investors have been alerted about which social media will be used to disseminate such information.”

Separately, Reg FD gave the paid wire service companies a license to print money, since they were the most expedient channel for ensuring the SEC’s mandate was met.  In spite of a loosening of SEC regs, most companies will not be using Twitter or Facebook to break news, though some forward-thinking companies will. The paid wires will continue to profit from publicly traded companies’ largesse. One look at BusinessWire’s daily rundown of news releases validates this.

Still, questions remain over the news release’s other value-adds. A client emailed me one recent night to ask why his upcoming event did not have the kind of advance media coverage that another event in his space garnered in SF Gate. I took a look at the link and realized that this was a PR Web-distributed news release. The conversation went like this:

Client: Shouldn’t we at least try and get the same from Silicon Alley Insider, BetaBeat, techCrunch or PandoDaily? Thoughts?

Me: This is not editorial. It is a paid PR Web news release that SFGate posts as part of an agreement with PR Web. In fact, a search on the [event] from the SFGate home page will not surface this “article.”

Me: You’re hardly a dummy. Some PR firms convince their clients that they actually “earned” this “coverage.” 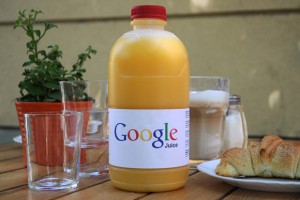 Then we should consider the Google juice or SEO a paid news release might generate. This is another area of contention. Does Google Search index news releases, and the links contained therein, in its organic results? Google says no, but the influential Search Engine Land disagrees. In one of the Google Forums, someone asks:

“I am researching press release companies to make sure the one I choose only sends the PR out to legit news media and online media, but I do not want to get penalized if they link to my website.”

“Note: I wouldn’t expect links from press release web sites to benefit your rankings, however.”

“A search in Google for [leasreepressmm] returns Mattâ€™s blog as number seven for me right now, only a few days after the press release was posted…Of course, Matt could have meant it wouldnâ€™t â€œbenefit your rankingsâ€ for more competitive search terms?”

Interestingly, Shift Communications chose to issue its own news release to tout its selection as Agency of the Year…via a paid wire service.