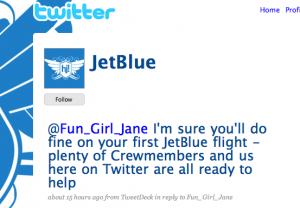 I recently noticed Craig Newmark, yes that Craig, give a Tweet-out to @comcastcares (aka Frank Eliason) over some issue he was having with his cable service.

I thought at the time how Craig, the mensch that he is, would have little problem soliciting Comcast’s attention. What consumer-facing company in its right mind today would dare to ignore someone with 19,000+ Twitter followers (and their followers…and their followers)?

It was only a few years ago that A-list bloggers were alone among the citizenry in their capacity to strike fear into the hearts of corporate reputation managers and their agencies.

I once had an issue with my Lincoln MKX. The roof rack ripped from the car when transporting my son’s sailboat to a regatta. It put a huge gash in the roof. The dealer washed his hands of the matter claiming the roof racks were not to blame. Ford customer service, after checking with the dealer, said essentially the same thing.

I decided to take to my blog to out the problem. Sure enough, Ford’s social media manager picked up on my online rant — in the days before Scott Monty mind you – and agreed to pay the repair cost. It was the only time my wife ever admitted that my blog had any kind of monetary value.

Not everyone has a blog, however. Enter Twitter. On Sunday, SF Gate reinforced how the microblogging channel has quickly emerged as the preferred customer service channel for companies with the wherewithal (and foresight) to listen and respond. No longer are consumers forced to wait interminably for a live body to pick up the phone or grapple with those tortuous phone prompts.

What’s more: one doesn’t have to be the founder of Craig’s List to get satisfaction. Tweeting the name of the offending company followed by the word “Fail” preferably preceded by a hashtag (#) typically does the trick. As Comcast’s Eliason explained:

“Social media is a communications channel that’s owned by the customer. It used to be that marketing was king. It’s now going to be about service, creating the right experience, (which) might be listening to your customers, engaging them or making sure what you’re doing is the right thing right off the bat.”

Talking about Twitter as a customer service channel, I’ll never forget how one of my clients — a prominent CEO in a crisis situation — had his name stolen on Twitter and the thief was tweeting all kinds of unbecoming things. I contacted Twitter’s founders @ev and @biz about the problem who in turn took down the offending account. I bet it was the last time that Twitters’ founders personally answered a customer service call.