Some months back, I was asked to appear on Bloomberg West to talk about Uber’s PR shortsightedness in the wake of a widely-reported, highly critical incident in Sydney, Australia that Mashable’s Seth Fiegerman summed up as follows:

“Uber briefly introduced surge pricing up to four times the normal rate in Sydney on Monday during an armed hostage crisis that upended the city’s central business district. One Uber customer in Sydney described it to Mashable as “almost price gouging at its worst.”

An hour into its “price-gouging” down under, Uber saw the error in its ways and reversed course. Still, the damage was done. In the Bloomberg segment, I purposely chose not to completely castigate this remarkable company, mostly because I was not privy to the facts at the time the decisions were being made.

(PR pundits have an unfortunate tendency to second guess crisis managers without knowing the factors that informed the beleaguered company’s actions.)

Still, I missed an opportunity to share with Bloomberg TV’s Cory Johnson one observation that I believe continues to hamper Uber’s expansionist aspirations to this day – a day when hundreds of taxi drivers in Paris took to the streets overturning cars and setting fires to protest Uber in that city.

“A protest by French taxi drivers turned violent in Paris on Thursday as hundreds of drivers blocked access to major roadways and airports. The demonstration was against the spread of Uber in the city and was part of a planned, nationwide protest against the popular app, specifically against the lowest cost “UberPOP” service.”

Getting back to Bloomberg TV, I neglected to talk about the long-term value a corporate mission can have as a reputation driver (and protector). Here’s how a few other innovative companies chose to publicly position themselves early on: 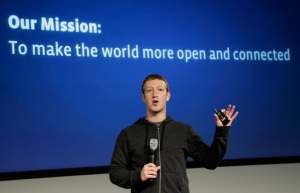 If one were to think about Uber’s corporate mission, it most likely would read as follows:

I’m not saying that a more noble corporate mission alone could have prevented the protests in Paris or the reluctance by many municipalities to embrace the embodiment of the new sharing economy. But maybe I am.

This just-published and insightful Bloomberg Business piece titled “The is How Uber Takes Over a City” notes:

“Uber’s made a name for itself by barging into cities and forcing politicians to respond…The company has since expanded to take on lower-cost taxi service in more than 300 cities across six continents, ballooning to a $40 billion valuation.”

For the VCs who backed Uber and stand to prosper big time when the company goes public, a prospect floated in Fortune yesterday, the growth and valuation metrics are what seems to matter most. For the other non-investor, but still vital publics, I’m not so sure. Uber must stop reacting and start pro-actively taking control of its reputation if it hopes to eliminate the potholes on its road to future success.

They may have first-mover status, but there are competitors, e.g., Lyft, Via, Gett…who consumers will happily embrace over sharp elbows.  Maybe the title on the Bloomberg West segment did have it right “Uber Needs to be More Sensitive.”