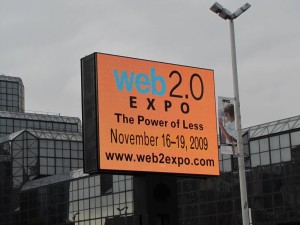 I finally had a chance to attend one of O’Reilly Media’s Web 2.0 Expos (as opposed to “the more exclusive” Web 2.0 Summit) this morning at New York’s Javits Center –>.

@conversationage (Maltoni): Social media is helping us close the loop between prospecting and nurturing customers

@peterkim: social media is just another on-ramp as part of an integrated campaign. not a be-all, end-all

@jenniferland: if people are complaining about their cable service, this is a perfect op for NetFlix to engage

@jenniferland: [Unlike years past when it was difficult to identify specific customers], Twitter offers “a huge firehose” of feedback

Disney Online’s James M. Smith: We have to be careful about marketing to kids. Moms are another story

Motorola’s @djksar: Started with podcasts to elicit feedback for its android products

@shivsingh: Victoria’s Secret solicits its FB fans to vote for a visit to their campus

@PeterKim: if we can’t [use SM to] operationalize new product ideas, we have to at least to pretend we’re listening

@conversationage: it’s hard to have a personality on Twitter with a logo showing

Immediately following the panel, I was approached by two reps for Scout Labs, stemming, no doubt, from this tweet:

@peterhimler: Web 2.0 Expo – Host Scout Labs gets plaudits from #opsocial panelists, even though service, in my opinion, not best-in-class

I sheepishly explained that after seeing The New York Times coverage of the company, I asked for and received a demo of the company’s conversation mining application. At the time, I thought it fell short in key areas, but then again, it’s no secret that true sentiment analysis remains elusive for most companies operating in this space…today. Maybe it’s time for a re-visit?

I did find time to talk about the changing agency biz with the always insightful Peter Kim (at left), formerly w/ Forrester, now a managing director at Dachis Group working from Boston. Here’s the audio from our talk. (RT: 4:27). I also ran into the inimitable Stowe Boyd and met Nilofer (@nilofer) Merchant (who has a new book “The New How” on the horizon) and O’Reilly’s VP, marketing, Christine (@christinew_) Walker.