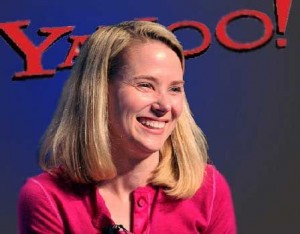 Oh to be Marissa Mayer. One day she’s excoriated for requiring her employees to deliver a little office facetime. Two weeks later she’s lauded for catalyzing a 15% increase in $YHOO stock price thus far this year. Hey, at least she’s doing stuff, which may account for the renewed investor interest in this company whose fate not too long ago was decidedly uncertain

The latest media bump, for those of you untethered to your social streams, occurred yesterday when the company paid a cool $30 million to acquire shutter a two year-old content shrinking app aptly named Summly (why all the startups with “ly” suffixes?) started two years ago by a then 15-year-old, self-taught British coder. 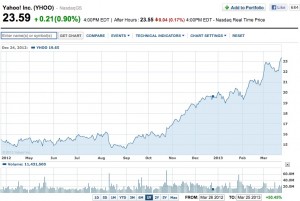 Great news for the kid. His future is assured. Not so great for Ms. Mayer, especially on this second day of the story when the media snarks emerge.

Here’s the headline from Mashable:

“Did Marissa Mayer Spend $30 Million on 3 Employees and a License?”

Inside the piece read:

“But the tech world is starting to question exactly what Yahoo CEO Marissa Mayer got for that payday. The Summly app, which summarizes long news articles, has been removed from the iOS App Store. The app wasn’t bringing in any revenue; now it can’t even bring in any new users intrigued by the announcement. (Nor can curious journalists review it.)”

The second day meme has started. On this side is Kara’s New York colleague Peter Kafka who took to his Twitter account to defend the purchase:

Not quite sure about furor re: Yahoo’s acq or techhire – Google and FB have spent much more lavishly, w/out a peep from cheap seats.
â€” Peter Kafka (@pkafka) March 26, 2013

“…didnâ€™t think it was an outlandish amount. ‘I donâ€™t think you can say they paid too much. You have to look at the strategic value to the buyer,’ he said, citing the example of photo-sharing service Instagram, which Facebook Inc. bought for $1 billion. ‘That was a strategic purchase by Facebook FB +0.26% for a technology that it considered to be their future. Instagram had 100 million users when it was bought by Facebook in April 2012, or $10 per user. Yahoo paid $30 million for 1 million users, or $30 per user.”

“…the considerable public-relations value that buying the app from the 17-year-old Mr. Dâ€™Aloisio has generated. Mr. Dâ€™Aloisio has proved very adept at generating PR, either by accumulating a number of celebrity investors (including Yoko Ono and Stephen Fry) or, as in the media storm that has followed the purchase, making the most of the teenage-millionaire-geek news story. ‘If you add it all up: the talent, the technology, the product, the strategic value and the PR value, I can see how it adds up,’ Mr. Klein said.

So there we have it. It’s all about the buzz (good or bad) to shake things up. Now did someone say  Yahoo was kicking Hulu’s tires?