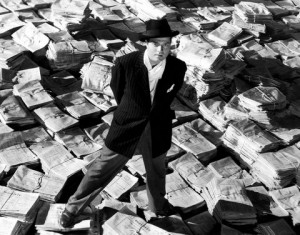 Everyone Democrat, Progressive, liberal, and centrist observer of the machinations of the media, let alone a decent share of conservatives, acknowledge the role Fox News has played in advancing this administration’s failed policies, let alone its current efforts to advance the fortunes of those who wish to perpetuate this seven-year national nightmare.

When the parent company of Fox News purchased the venerable Wall Street Journal, many media watchers fretted that the caustic views of The Journal’s opinion pages would seep onto the news pages. To date they haven’t (but we still have six weeks).

All seemed to have overlooked that feisty News Corp-owned tabloid in the heart of New York City. You know, the one that’s a favorite of this town’s cognoscenti. The New York Post seems to have few qualms, if any in reporting the Republican Party line in its news hole — if you can call it that.

Here are the headlines from yesterday’s daily politics section “Race for the White House.” It runs in the front-of-the-book news pages:

“Hackers in Attack on Sarah”

That’s all of them folks. I wonder where reporter Carl Campanile, whose byline graces three of the four, went to journalism school? I suspect he didn’t. William Randolph Hearst lives. As for the McCain campaign, why raise money for ads when you have your own page of advertorials in the heart of the media capital of the world?