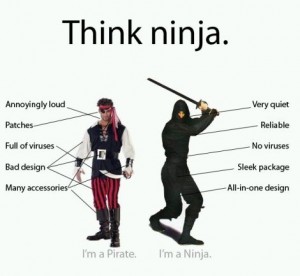 If one were to guess which of the world’s most-watched corporations had the most command-and-control approach to its communications, invariably that Cupertino, CA company would rank right up there.

Apple Inc.’s PR is legendary, less for its embrace of the new tools of the trade — and the transparency that comes with it — and more for its top down, tightly-managed means for massaging the message.

Now I’m not saying this is such a bad thing. Who can argue with success? I just find it ironic that a company like Ford, founded in 1903 in Motor City, puts Silicon Valley-based Apple to shame when it comes to social media communications and openness.

Still, who’s to say that command-and-contol and social media communications are mutually exclusive? I do believe that companies can engage the social graph, while retaining control over how their brands are portrayed in the public domain. It just requires a top-down cultural shift, and the inculcation/empowerment of all employees, not just the corporate communications department.

With all its product innovation and brand esteem, I just don’t see much evidence that Apple has fully embraced this mindset. Maybe this is about to change?

In the last few weeks the company has taken it on the chin for its refusal to allow the Google Voice app onto its AT&T-networked iPhone, and more recently a flap over banning the Ninjaword dictionary’s entry into the mostly PG-rated PDA’s App Store. The Google Voice app flap prompted a maelstrom of malcontents…and an FTC investigation. The Times‘s David Pogue neatly summed up the brouhaha:

“In short, what Apple and AT&T have accomplished with their heavy-handed, Soviet information-control style is not to bury these useful apps. Instead, Apple/AT&T have elevated them to martyr statusâ€”and, in effect, thrown down a worldwide challenge to programmers everywhere. ‘Get around THIS,’ theyâ€™re saying.”

“Schillerâ€™s efforts show that Apple is starting to worry about the companyâ€™s perceptions when it comes to the App Storeâ€™s policies…Apple wants developers to believe differently and that their actions are not without reasonâ€”at least most of the time. (Note: In case you are questioning whether this was truly a publicity stuntâ€”for the benefit of journalists, developers or federal investigatorsâ€”Apple PR did indeed send me a link to Schillerâ€™s comments this morning…”

So why an email and not a blog post? Both would inevitably surface in the court of public opinion, so perhaps Apple’s PR corps thought this (private/public) approach would have shorter media legs?

But wait. Did Apple even have another option? I couldn’t find the official Apple Inc. blog or Twitter feed.