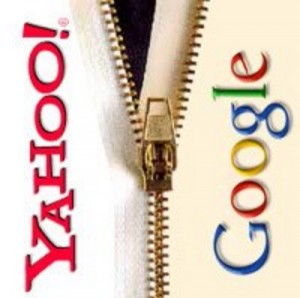 As Yahoo! threw out its last lifeline to prevent it from falling into the arms of the boys from Redmond, Google was there to save the struggling online enterprise.

Few at the time thought, or rather played up, how much turbulence such a Google-Yahoo ad partnership would generate from the regulatory authorities both here and abroad.

Recently those regulators, and the media that follow them, are making the once-presumed done-deal seem destined for the dust bin. So what PR-driven recourse do these two digital icons have to revive the prospects that their marriage will ultimately be consummated?

One answer: bypass the mainstream media filter altogether by building a Yahoo-Google “Facts Site,” as we learned today in a tweet from long-time watcher of all things search, Danny Sullivan:

“Google has launched a new informational site designed to tell its story about why there’s no need to fear an ad partnership between it and Yahoo. Within the site, you’ll lots of information about the deal except for one key fact: when exactly does it start? The launch of the site suggests any day now.”

The site opens with a slide show whose title is:

On the 17 slides, which includes current and future screen shots with and without search-generated ads, I found slide 11 to be especially effective. It compares the deal to other seemingly monopolistic hook-ups, e.g., “Toyota provides hybrid engine technology to Ford,” “Canon provides laser printer engines to HP,” and “UPS provides air freight services to U.S. Postal.”

Makes sense, though I wonder whether these companies truly represent an apples-to-apples comparison.