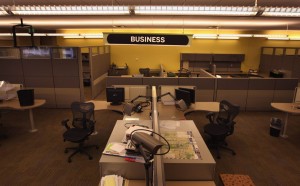 As PR 2.0 twists and turns its way into PR 3.0, we are constantly reminded of our growing role as producers of content that drives awareness, opinion, and action.

Cases in point: the Twitterization of the Skittles home page, the de-listing of one’s Facebook friends for the sake of a Whopper, and the first appearance on YouTube by the president of Domino’s USA (and he hopes his last).

We now have options that transcend the arbitration of journalists to allow an increasingly tethered public to directly receive and/or discover our text, still images and video messages by way of their desktops, laptops, Blackberries and iPhones.

Even so, the news business is not going down without a fight. This weekend, Frank Rich, Maureen Dowd and even President Obama extolled the virtues and value of dedicated news professionals in a Jeffersonian democracy. None offered a remedy for slowing the deterioration of their role in preparing the main course that once satisfied the public’s appetite for news content.

“If we lose the last major news-gathering operations still standing, there will be no news on Google News unless Google shells out to replace them. It wonâ€™t.” Rich wrote.

I’ve previously shared my feelings about the value of quality journalism. So instead, I wish to draw your attention to an unsettling piece from Friday’s Wall Street Journal that in my mind is an insidious development on the road from journalism 2.0 to 3.0. (No, it’s not WSJ.com’s micropayment plans.)

“…former MySpace Chairman Richard Rosenblatt has spent the past three years refining a set of algorithms that it uses as a guide for mass-producing content that it publishes on its many Web properties.”

As I understand it, Mr. Rosenblatt’s company, Demand Media, creates content, not based on a journalistic assessment of what’s news or newsworthy, but instead on an algorithm that matches (and attempts to monetize) consumer and advertising demand for a given topic. The Journal’s Emily Steele writes:

The company then entices thousands of journeyman freelancers with an offer of “$20 per article or video” to produce the “in-demand” content. The vetted pieces are posted on a Demand Media site and syndicated across other websites, with ad dollars to follow. At least that’s the model.

The advent of automated content creation, based on an ad-driven algorithm, takes the notion of news as a commodity to a whole new low, i.e., that of an automated commodity. Or as VivaKi Ventures’ Tim Hanlon notes: