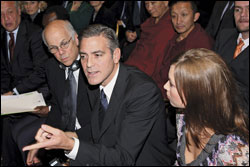 Control. What a concept! As the media splinters at an alarming rate, alarms sound among Hollywood’s PR set over their commensurate loss of control. The phenomenon has thus far eluded the big MSM entertainment outlets like People and US, ET and Access where command and control remains an art…akin to blackmail.

“It’s very difficult to keep up to the moment with any of these new platforms,” says Henri Bollinger, who joined the Publicists Guild in 1957 and is awards chairman of the 45th annual ICG Publicists Awards, to be held today at the Beverly Hilton Hotel. “I make use of the Internet constantly, but it’s always ahead of me. And it’s redefining the way we do public relations and marketing for movies and television.”

Good for you, Henry! You joined the Guild a half-century ago, and today find yourself going at it with the virtual media crowd.

One tradition that hasn’t changed since 1964: the annual Publicist Guild Awards, which took place yesterday at the Beverly Hilton. I suppose we’re so cloistered on this coast with the Big Apple, PR News, Silver Anvil and PR Week awards, that we’ve lost sight of Hollywood’s homage to the segment of our industry that has done the most to earn the name of this blog.

Yet Henry’s lament about the changed media landscape, e.g.,”I keep on adding outlets to my list, and a lot of them are Web-only…everyone is desperately trying to adapt, and those who are not are left behind,” pales when one considers the changed PR landscape beyond blogger relations.

We’re talking social media news releases that bare little resemblance to Hollywood’s usual press fare; Twitter campaigns as the seeds of media intrigue; Real time video posted for ubiquitous access; Content development and magnetization for Googlers’ discovery; Custom widgets to drive traffic and stickiness; A presence in, or creation of online communities; Video hosting sites appealing to every demographic and special interest; Mining of the online conversation to head off a sticky wicket…

Henry, don’t feel disintermediated just yet. These new tools, and countless others, continue to confound the majority of (y)our colleagues throughout the industry.