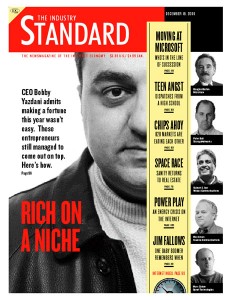 A few weeks back, I started to draft a post that in effect anointed Wired as the media property that has done the most to fulfill the unfulfilled promise left by the Industry Standard following the dot-com (and The Standard’s subsequent) meltdown.

Wired, the magazine, website, and branded PBS science program, has its editorial fingers firmly on the pulse of what “being digital” means in this day and age (even with its editor’s low tolerance for sub-standard PR people). Moreover, the magazine has shown healthy annual ad revenue and ad page growth (12.1% and 2.6%, respectively) at a time when magazines — especially the business books — are struggling with these ever-important indices.

In fact, I think Wired‘s sibling pub Portfolio has finally hit its stride following more than its fair share of high-profile bumps. It may soon redefine the business magazine category — online and off — and silence the naysayers in the process.

The point of today’ post, however, is not to sing the praises of Conde Nast, but rather to point to an item in yet another next-gen media property, also loosely inspired by the editorially innovations of the Industry Standard.

PaidContent’s David Kaplan today posted an interview with IDG Communications’ CEO Bob Carrigan who spilled the beans: IDG resurrects The Industry Standard, but this time as online-only outlet with a community 2.0 twist. Talking Biz News speculated about it last September. From Carrigan:

â€œWe had an inspired group within our company [that really wanted to bring the brand] back. We get a lot of natural traffic against it and The Standard is still one of the most storied brands in the history of the internetâ€¦ We certainly didnâ€™t want to do what was done in the past. When I used to read The Standard in print, [it was] like you were part of the internet community. Today, you can be part of a live community, with all the tools weâ€™re talking about. Weâ€™re going to be leveraging Web 2.0 community tools to be able to harness the idea of the users – and the users will be an amalgam of media, content, venture capitalists, all the people that are traditionally attracted to that brand. And they will make predictions about key areas in the internet economy: â€˜Will MySpace be bigger than Facebook?â€™ or â€˜Will Apple (NSDQ: AAPL) sell X amount of iPods?â€™â€

At a time when the notion of “we are smarter than me” is gaining traction across all aspects of our virtual lives, it makes perfect sense to deploy “web 2.0 community tools” to re-invent the publication…a la Digg or Amie Street. Or as Derek Butcher calls it on the site: “The Launch of a New Standard.” So far nothing on the resurrection from former Standard-bearer (founder and editor) John Battelle.