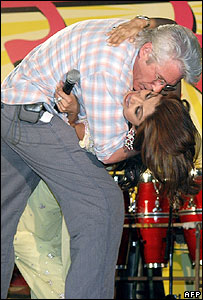 I don’t mind the Wall Street Journal and New York Times’ news alerts periodically popping on my desktop (as long as their purveyors don’t get too trigger happy). So far, both have been judicious in what they’ve chosen to send.

Take the two WSJ Alerts that moved moments ago, separated by a mere three minutes. The first hit close to home for the publisher of the Wall Street Journal:

Trading in the stock is halted on the big board.

Now this news will soon command a fair share of attention (to put it mildly), so I’ll refrain from adding my two cents except to opine that it likely wasn’t Barrons or Dow Jones or Marketwatch that seduced Mr. Murdoch. The News Corp CEO no doubt wants to bond more closely with his idealogical soulmates on the editorial pages of The Journal.

The other News Alert concerned Lord Browne of BP’s sudden resignation as CEO of the world’s #2 oil company. Now this blogger has written (with great admiration) about Lord Browne and his break with big oil to reinvent BP as a more (much more) environmentally conscious company. In fact, I even played a small role in helping those revelations get the attention they (and Sir John) deserved.

The more recent news out of BP — most notably, environmental issues over faulty maintenance of BP’s Alaskan pipeline — hastened Lord Browne to announce his decision to step down this July. Today, however, I am scratching my head by the CEO’s sudden ouster for reasons allegedly having to do with a threat by the London tabs to expose his private life.

“In my 41 years with BP I have kept my private life separate from my business life,” Lord Browne said. “I have always regarded my sexuality as a personal matter, to be kept private. It is a matter of deep disappointment that a newspaper group has now decided that allegations about my personal life should be made public.”

Since when does one’s sexuality constitute a reason for dismissal? My left coast PR friend Howard Bragman just sent me a piece in which he’s profiled about his work helping professional athletes come out of the closet. Would any of his clients been forced to resign in a modern society as a result of their admissions?

Either there’s something more to this news, or the UK has taken a page from its former territory where Richard Gere’s being sued for giving some Bollywood babe a few pecks on the cheek…on national TV, no less. Stay tuned.