Buddy Media chief Michael Lazerow took to the pages of the influential BusinessInsider yesterday to anoint SxSW as simply a “must-attend” event. He observed that SxSW Interactive today is larger than SxSW Music in which the legendary festival has its roots.

What has suddenly driven the interactive conference’s success? In my opinion, it’s a confluence (perfect storm) of three factors: 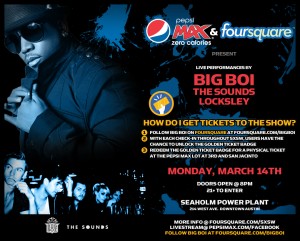 To the third point, the owner of a very popular restaurant in the heart of Austin’s hottest district confided to my wife and me that this year for the first time he closed his restaurant (three times!) during SxSWi for privately sponsored parties, in spite of asking double a typical evening’s take. He also heard that Pepsi spent some $1.4M on its popular PepsiMAX lot from where it staged many events and interactive activities.

I suppose there’s also the fact that the conference is loads of fun, a fab place to network, let alone hobnob with the social/digital A-list. Attendees will likely get a glimpse of the next big thing. As for me, I just enjoyed meeting and sharing what I know with those building the next-gen of digital companies – companies that would not have been possible five years ago absent broadband penetration and online/mobile social sharing.

Here is a small sampling of the start-ups I met during my four days in Austin:

VYou – A rapidly growing interactive video platform (i.e., “conversational video”) that allows anyone (or any organization) to answer users’ questions via video.

FanBridge – A turn-key platform that has its roots in the music biz to give artists the social tools to build and engage their fan base. Today, with fans and followers transcending the music biz, FanBridge is fanning out.

IndieGogo – Another turn-key social media-driven platform that let’s anyone raise money for any reason. Some 22,000 “campaigns” reside on the site ranging from a young man who needs money to have a chipped tooth repaired to inventors with cool prototypes to documentary filmmakers.

blip.tv – While not a “start-up” per se, I did chat up the head of content for “the next generation television network” who told me that the site is now getting some 130M+ monthly video views and 32M uniques. Wow!

Hashable – I suppose if buzz factor is a barometer of a start-up’s promise, the New York team at Hashable should be very pumped about its showing at SxSW. The mobile app aspires to disintermediate the business card in favor of digital connection and relationship management. (All the cool kids I know use it.)

SecondMarket – So you want to invest in Facebook’s IPO? Who doesn’t? Maybe you should set your sites on another hot privately-held start-up. SecondMarket has upped its game by giving potential investors the tools and market data to get in on the action at an early stage.

Given the cacophony of companies clamoring to rise about the clutter at SxSW, the conference as launch platform can be a tall order for most. I didn’t get a chance to meet the team at GroupMe, though I had caught their demo at the New York Tech Meetup last fall. Lots of buzz around them, and a rival called GroupedIn, which recently integrated Twitter and Facebook to its group messaging platform. Mashable reports:

“Grouped{in}, like competitors GroupMe, Beluga and Fast Society, allows users to create groups with which they can group text (you can toggle between SMS and push notifications, which is handy). However, unlike the aforementioned apps, users can also check out the Twitter and Facebook streams of those in their groups as well.”

Most will agree that group messaging was “the big story” emanating from SxSWi 2011. Given the record number of companies showcasing their wares, I’d say it’s impossible to identify a single winner. I did observe one important trend, though perhaps not as sexy as the others, that emerged from the conference. I’ll post on it shortly.