Hardly a day passes without my seeing a tweet from or about Civil, a new enterprise that will use blockchain technology and the sale of tokens to revive and sustain the badly battered journalism profession.

Today the purveyors of high quality news are not only facing a fiscal crisis, but they also face an existential one resulting, in part, from daily attacks by a “President” seeking to sew doubt and plausible deniability for the moment when journalists finally uncover the definitive proof of his criminality. 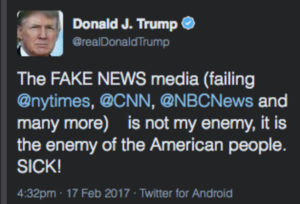 In spite of Trump’s insidious campaign to denigrate the media, one would be hard-pressed to find a single educated American who does not recognize the quintessential role journalism plays in a modern democracy. Few can overstate the danger posed by those who seek to compromise the fourth estate’s Constitutionally protected role to shine a spotlight on the unscrupulous forces working against the public interest.

Just this week, a small newspaper in Georgia exposed a plan by a political operative to shutter seven of nine polling locations in predominantly African-American districts just as the state’s first African-American woman is running for governor. The public exposure led to a reversal of this scheme.

Separately, the Dallas Morning News just reported that in Texas where one needs a valid driver’s license to vote and where GOP Sen. Ted Cruz faces a serious challenge from a surging Democratic challenger Beto O’Rourke, the Texas Dept. of “Public Service” announced plans to close 87 DMV offices — four in Democratic-leaning Dallas-Fort Worth —under the incredulous guise of easing long lines. I’m hoping a little journalistic sunlight will thwart this.

While the GOP-controlled Congress has forsaken its authority to balance a swampy Executive branch, journalists must fill the void. And they are doing just that: with revelation upon revelation filling meticulously reported stories on everything from self-dealing corruption and public policies to sex scandals and blatant law breaking.

Here’s the problem: just when quality journalism is most needed, the more substantive and credible outlets leading the charge have become lessaccessible to the public. Their revelatory reporting increasingly resides behind paywalls to which most of America (outside of New York and DC) would never subscribe. Here’s a topline of what it costs to read some of today’s more respected journalistic enterprises:

Many will argue that The New York Times’ 2.9 million digital subscribers now give it the financial latitude to do what it does best. In Q2 alone, the Times’s digital paywall added nearly $100 million to the news organization’s coffers. But The Times is an anomaly among U.S. newspapers, most of which don’t (or can’t) command the $14.95/month The Times does.