No. Kylie Jenner is not a client of my firm’s. In fact, I find her latest PR stunt offensive on so many levels. Yet, here I am writing about it, as an unwitting marketing pawn in a carefully choreographed chess game designed to add more media fuel to the fame flame that has kept her family in the news and UGC spotlight for years.

This latest effort to one-up her half-sister all-nude Paper magazine cover shoot last year that also set tongues-a-wagging, Ms. Jenner posed, S&M-like, strapped to a wheelchair on the cover of Interview, a magazine that also hopes to best its 80’s-era rival.

I wonder if she herself dreamed up this menagerie or was it the work of some Svengali-like PR stylist or a team of such marketing whizzes competing to see who can conceive the most outrageous scenario for the primary purpose of creating buzz? Is it really necessary today to manufacture outrage to capture people’s shorter and shorter attention spans? While we’re on the subject, did you know that Donald Trump has spent just $217,000 in political advertising?

Followers of this space may be familiar with one of my more viewed posts that centered around Miley Cyrus’s now legendary, yet supremely distasteful performance at the VMA Awards that singlehandedly thrust her (excuse the pun) back into the media spotlight, just as her celebrity was on the wane.

At the time, I suggested that it was a clever PR ploy to grab headlines – good, bad and twerkingly ugly. Guess what? It was, and it worked…spectacularly. I’d argue that that single, nationally televised performance spring-boarded her to unprecedented new heights of career fame and fortune.

Last week, who in New York (and elsewhere) weren’t taken aback by Amazon’s ill-conceived effort to promote its new series by wrapping the 42nd Street subway shuttle with Nazi-like insignia? The marketing editor from the Wall Street Journal tweeted about the incident to the Journal’s former ad columnist who now toils on the TV beat for Variety: 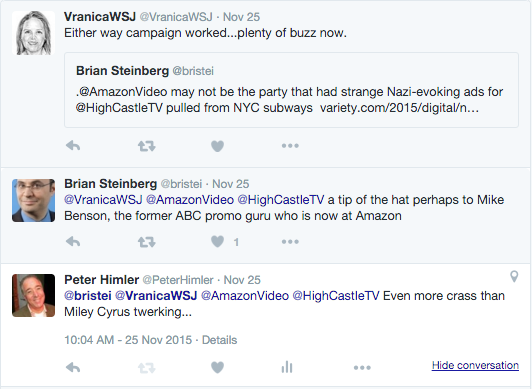 Of course, I had to weigh in.

Interestingly, many reported that Amazon recognized the error in its ways and decided to pull the campaign.  However, Mr. Steinberg astutely picked up on the fact that Amazon itself may not have actually made the decision to pull the offensive (to many) campaign:

“Amazon Studios creates high-quality, provocative programming that spurs conversation,” Amazon said in a prepared statement. “‘The Man in the High Castle’, based on an acclaimed novel, explores the impact to our freedoms if we had lost World War II. Like ‘Transparent’ and the movie ‘Chi-Raq’, stories that society cares about often touch on important, thought-provoking topics.

We will continue to bring this kind of storytelling to our customers.”

And we’ll continue to photograph, write and tweet about them…for better or worse.