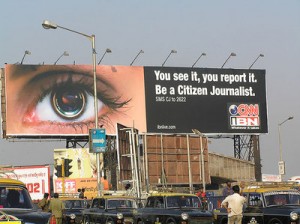 No. I don’t have the chutzpah (I mean prescience) of a Jay Rosen or Jeff Jarvis to portend what that future holds. Nonetheless, Jeff’s observations posted yesterday (and captured in part on video by Rafat) from an OPA (a former client) event in London, coupled with Jay’s Surowiecki-esque approach to news reporting are worthy reads for those following the trends in the fourth estate, (i.e., anyone in our profession).

Jeff embraces the acronym WWGD (What Would Google Do) in advocating (a la John Battelle) for a decentralized media architecture wherein the public is at the center and, effectively sets when, where and how it consumes or produces news, info (and advertising). From Jarvis:

“I talked about Yahoo as the last old media company to look at the world this way (along with all the older media companies): ‘We control content. We market to get you to come to us. Then we feed you as much advertising as we can, until you leave.’ Thatâ€™s the centralized model of media. I contrasted this with the decentralized, distributed model embodied by nobody better than Google: ‘We go to where you are and put service and advertising there. Your pageview is then our pageview. And we have enabled you to do what you want to do. And we can all do more of it.’ I argued that media companies should ask WWGD â€” â€˜what would Google do?â€™ (and, yes, Google is the new God).

“…that some media brands â€” yes, the Times â€” are worth coming to. He supports the outside-in model and sees The Times as â€˜in.â€™

In making his case for a distributed (versus centralized) media model, Jarvis agreed with Rafat who annointed him as occupying the middle ground:

“Yes, I do think mine is the middleground for itâ€™s about working together in new ways that were never possible before to do more than we ever could before. (And, yes, I just ignored the blogger slaps. I say on the tape that I dream of the day when I can go to a conference and not have that old spat; itâ€™s so tired.)”

He actually didn’t ignore the blogger slaps, or at least not the camera phone-captured remark made by Nisenholtz whom blogger Howard Owens insinuates is a Luddite when it comes to acknowledging bloggers’ journo creds. (I guess Jeff’s consulting contract with The Times has lapsed. And Martin is anything but a Luddite.)

Jarvis then goes on to defend his new calling as bona fide journalism by citing a compendium of the original stories he’s generating while in London. He leaves with this message:

“…Nisenholtz needs to hear from that is that bloggers keep each other honest, too. In distributed media, there is no us and them; itâ€™s all we.”

Like a project with which I was recently involved called We Are Smarter than Me in which Wharton, MIT Sloan and Pearson Publishing partnered to craft a business book written and edited wiki-style, Rosen’s mission is to tap and organize the wisdom of the crowds to produce quality journalism. In a lengthy piece (Jay’s rarely at a loss for words), penned last week on his wired partner’s website, Rosen concludes:

“One day, stories with a thousand people on the masthead might become routine, and we’ll know how to do them. Right now we’re seeking hundreds, who can help us take apart and put together a single sprawling story that matters to Wired and the world beyond.”